Illuminating a Stairway to Heavenly Revenues

Bill Simpkins of IGS Homeworks in Houston was stepping into unchartered territory when he was asked by the design team to illuminate a lavish staircase.

“The design team brief said the client wanted a wooden-clad, floating, glass-polished stairway with the treads lighted without a trace. They asked me if I could do it. I said, ‘I’ve never done it before, but I’m going to give it go,'” says Simpkins, president of IGS. 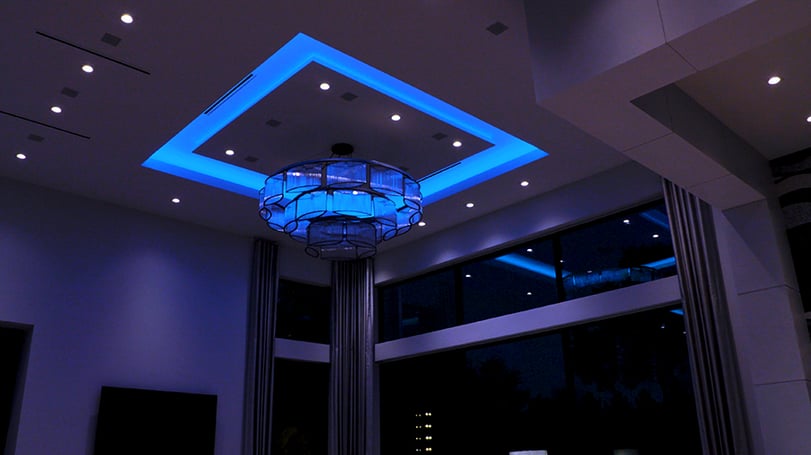 The result is a striking masterpiece that is at the centerpiece of a $400,000 tech project using Colorbeam LED lighting.

“It turned out really impressive,” says Simpkins.  “The wiring for each tread is inside the staircase. The wire runs down the steel structure, which is wooden-clad with cedar or some other exotic wood. The floating staircase has three turns in three separate sections with two landings.”

Each of the three separate riser sections has its wiring run in its own channel. IGS ran an individual wire run down to each section and then each of the 30 total treads had tape lighting that was linked to main wire run. This way, each of the three sections is independent from one another. The entire thing is controlled by a Crestron system. The full project was about $1 million and includes motorized shades, multiroom AV, a gold simulator, video surveillance, dedicated home theater and more.

“My original idea was to wire every other tread and have the tape lighting mimic walking up or walking down the stairs. That was my original plan, but it became just too difficult,” remarks Simpkins. 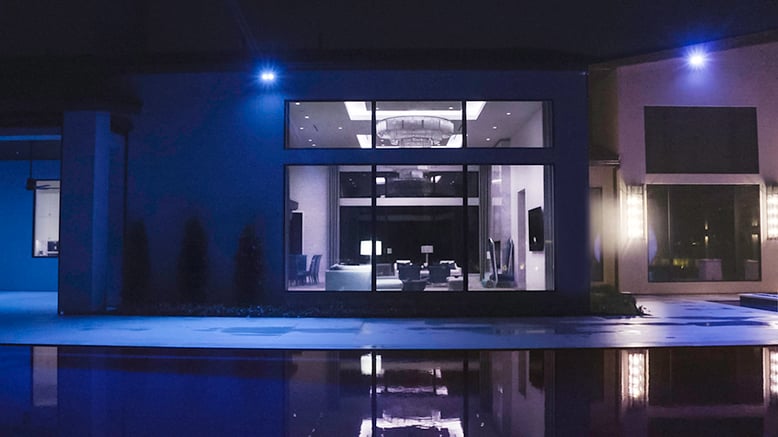 The staircase is just one element of the overall project, which was a contemporary style, 14,000-square-foot home with approximately 9,000 square feet of living space.

“The client has an interest in wellness, and tunable white fits that particular requirement. The added option to dress up their house for events using the color-changing feature was an added bonus,” he says.

IGS Homeworks was established in six years ago in Texas, but the company works on projects across the U.S. and internationally, including current projects in Costa Rica and the Bahamas. In all, IGS employs 12 staff, but used an additional eight independent contractors on this project, which is much larger than its normal project size range between $50,000 and $250,000.

This particular project was done by a luxury homebuilder that IGS has worked with previously on a number of occasions.

The company was an early adopter of low-voltage lighting, having installed Colorbeam systems since 2018.

“Lighting gets us involved in the design process early, which gives us the opportunity to broaden our scope and increase overall project revenue. It’s differentiated us from the competition and clients love this additional element of control within their home,” notes Simpkins.

The staircase was not the only challenge IGS had to overcome on the project. Defining the lighting scenes early on in the process was critical for a project of this scale. It required significant planning and logistics, and also flexibility as the home build progressed, according to Simpkins. Just the rough-in portion of the project was $80,000 alone. 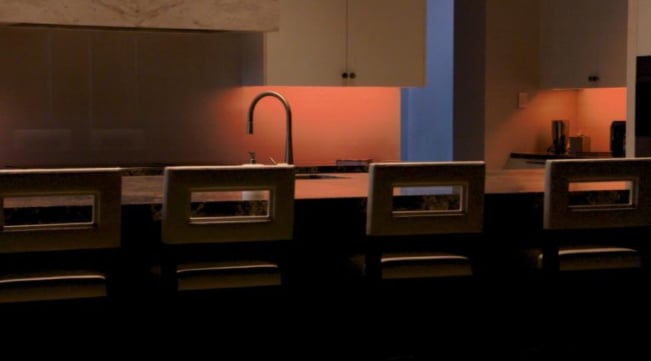 Strategically placed Colorbeam lighting allows for a highlighting effect above the sinks in the kitchen.

“This was a big job; it’s quite complex. It is not just a matter of stringing all the light fixtures together in a series and switching on the power. You’ve really got to understand the product. You’ve got to understand that different fixtures and different wattages, which require different channels in the DMX and different drivers. You feed all that into the system and you’ve got to know what you are doing otherwise you’ll get yourself in a world of trouble,” comments Simpkins.

Fortunately, Simpkins has the background for a project like this. He cut his teeth as a designer for the entertainment industry doing concerts, set design, and lighting and audio rigs  before moving into the commercial AV world years ago.

“Lighting has always been a passion for me, so I am never afraid to take it on,” he says. “I worked with Colorbeam to help me with the fixture selection so I could create the effect I wanted, then we figured out from an engineering standpoint how to make everything work.”

Low Voltage Lighting Brings an Estate to Life by the HTA

Quietly nestled high above Los Angeles in the Beverly Hills Post Office enclave, the Summitridge Estate is an expansive property that overlooks the urban jungle below, with panoramic views of the...
Read More
Press Release

The Top 5 Commercial Lighting Trends for 2021

Audio visual (AV) integrators use components such as audio, display, computer software and a vast array of other technologies to create complete experiences for end-users..
Read More
Low Voltage Lighting

How Does Low Voltage Lighting Work?

Thomas Edison’s invention of the incandescent electric lightbulb in 1879 was groundbreaking, yet early innovators like Edison would not have comprehended just how far the lighting industry would come...
Read More
Low Voltage Lighting

As an audio visual (AV) integrator, it’s your job to oversee the installations and management of AV solutions in a way that ensures your client’s have efficient, productive and seamlessly running...
Read More
Low Voltage Lighting

"I learned that on any high-end project their needs to be a technology designer, a lighting consultant, acoustic consultant and engineering consultant at the very beginning of the project. ” TROY...
Read More
Low Voltage Lighting

Jesse Howe is the president of HTA Certified home technology firm Signals Audio Video. He has been working at Signals for more than 20 years, in charge of operations in four locations, including Palm...
Read More
Low Voltage Lighting

Illuminating a Stairway to Heavenly Revenues

Why You Need Tunable Lighting For Your Next Residential Design Project

Designing high-end residential homes is no easy feat. You need to specify the right solutions, make the right design choices and create a property that will truly delight the end-user who...
Read More